Home » Gemstones » Tree Agate vs Moss Agate: What’s the Difference Between Them?

Tree Agate vs Moss Agate: What’s the Difference Between Them?

Tree Agate vs Moss Agate, can you confuse them? We will draw a line in this blog to help you differentiate between Tree Agate and Moss Agate, because they are distinct stones.

Tree Agate as well as Moss Agate are beautiful and distinguished stones that belonged to the large Agate Family.

These two gems are marked by distinct green patterns, which superbly embellish their surfaces. But, they can also create subtle confusion, making it difficult to distinguish between Tree Agate & Moss Agate. In certain cases, we may even consider these two crystals one and the same.

These highlights will allow you to clearly distinguish the Agates from each other if you are searching for crystals.

Also, we’ll be discussing the healing properties, meaning, chakras, and other characteristics of each stone later in the blog. This will enable you to choose the right crystal energy for your purpose and intention.

Tree Agate and Moss Agate are able to radiate healing energies that target specific areas of the body.

You will have to decide between Tree Agate and Moss Agate, depending on what your inner intentions are and what healing sensations you desire.

Tree Agate, the ultimate crystal of tranquility and ease, is what you need.

This crystal can help you feel calm, which will make it easier to manage your day and clear any obstacles that might prevent you from finding the peace you need.

You can connect with this precious gem to create a nurturing attachment to nature that will allow you to tap into your inner feeling of stability and protection.

Moss Agate, also known as the Crystal of New Life Chapters, is a crystal that nourishes and illuminates the soul. It aligns you with your long-awaited desires, which will help you design the life you want.

This green gem will boost your energy and increase your willpower, allowing you to be more focused and determined to conquer your day.

Opacity/transparency and basic color of the stone

If you place Tree Agate alongside Moss Agate, you will see that each stone has a different base color (we will ignore the stone’s patterns).

The Tree Agate green inclusions can be seen on a clear and visible white surface.

In Moss Agate’s instance, the inclusions of this Stone are placed on a translucent and transparent surface.

Let’s now look at the overall look of these crystals.

Examine the patterns on the stone more closely

It is now the right time to explore these Agate gems’ stunning green inclusions.

If we examine the names of these two crystals more closely, we will see that the names “tree” and “moss” are misleading.

Tree Agate displays branches and fine vines inclusions that can vary in intensity. These inclusions surround the stones, creating a scene or illusion of vines that grows over a white opaque counter. 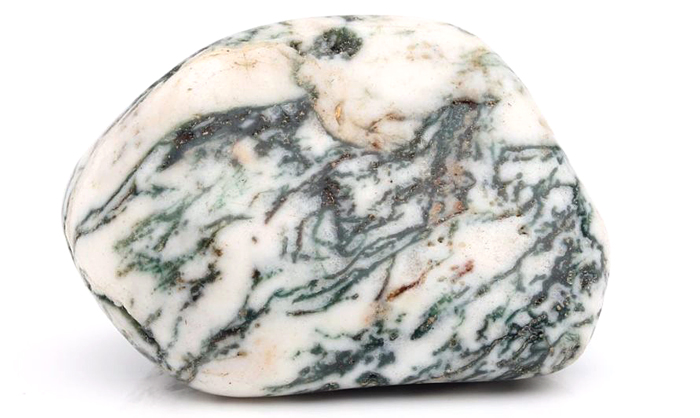 Moss Agate is a mosaic of mossy patterns or dense bushlike inclusions.

This crystal’s distinctive visual feature is the inclusion that runs across the stone in a translucent and transparent matrix. 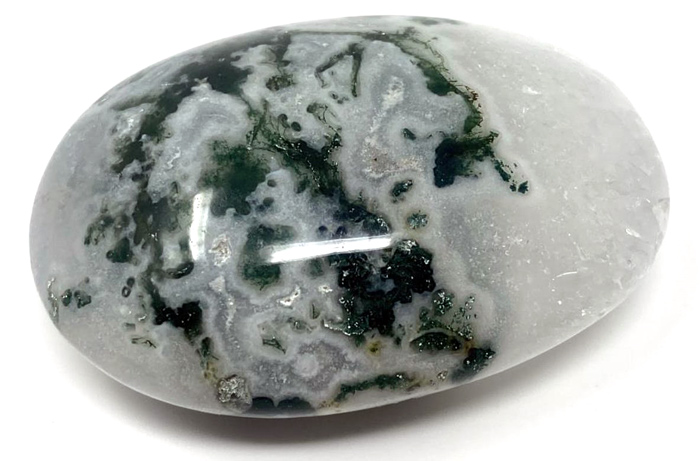 Certain energy centers or chakras on the body

Tree Agate, as well as Moss Agate, target the heart chakra. It is a fundamental point of energy that harmonizes, balances, and harmonizes everything in love, tolerance and emotional balance.

Tree Agate is linked to the root Chakra, which makes them different.

Tree Agate is connected to this earthy point of energy to help you feel grounded, secure, and more stable.

By making a deep connection with the healing energy of mother earth, this stone helps you access a sense of security and inner tranquility.

Additional crucial questions regarding this subject

What makes agate and moss agate distinct from one another?

The visual aspect is the primary distinction between Agate and Moss Agate.

Agate stone has a single hue that permeates its whole surface; it can be any shade of green, pink, blue or red, and its outer layer may have distinctive banding patterns.

On the other hand, Moss Agate has a distinctive aesthetic quality that is different from the typical Agate stone that we may imagine.

This stone has distinctive designs that resemble green moss growth on a ground of white. These green patterns resemble a little representation of moss encased inside a stone.

Are Green Agate and Moss Agate the same thing?

Green Agate displays a harmonious, green color distribution throughout its entire surface. It is evident that the stone has light colored bands and is also covered in green.

Moss Agate, on the other hand, displays a pattern and is not just a uniform color like Green Agate. The surface of Moss Agate has a Moss-like pattern that is distinctive and highlights the difference between these stones.

Is Tree Agate a kind of Agate?

Tree Agate is part of the large family of Agate stone. Its appearance is what would lead you to believe that it is not an Agate Stone. This stone doesn’t have the Agates-stone-like banding.

Tree Agate shares the same mineral makeup as Agate, which consists mainly of silicon dioxide. It is also considered a microcrystalline crystal quartz.

The distinctive feature of Tree Agate is its white base and naturally occurring inclusions that resemble green tree branches.

There are more names for this stone in addition to Tree Agate. Another name to consider is Tree Jasper. Since Tree Agate does not have a translucent finish like other Agate stones do, Tree Jasper is a more realistic description.

Comparison of Moss vs Dendritic Agate

The aesthetic traits are what most distinguish Dendritic Agate from Moss Agate.

Tree Jasper as well as Tree Agate have one commonality: they both display the same kind of green-colored branch-like patterns.

Tree Jasper appears almost exactly the same as Tree Agate. They both display the same type and amount of green patterns on a transparent white layer. This makes it easy to conclude that Tree Agate is Tree Jasper.

Although Tree Agate and Moss Agate are both part of the same crystal group and have similar visual attributes, they are very distinct and offer unique characteristics.

Check out the four key distinctions between Tree Agate and Moss Agate in the list below.

Jade vs Emerald: What Kind of Green Gemstone Is Right for You?

Can You Put Citrine in Water? 9 Crucial Dos and Don'ts to Be Aware Of

Crackle Quartz: The Stone of Balance and Stability

Can You Put Citrine in Water? 9 Crucial Dos and Don’ts to Be Aware Of

We will be happy to hear your thoughts

Crackle Quartz: The Stone of Balance and Stability

Can You Put Citrine in Water? 9 Crucial Dos and Don’ts to Be Aware Of

Tree Agate vs Moss Agate: What’s the Difference Between Them?